Welcome to the digital age where there are more than 4 billion active Internet users and approximately 3 billion who access the Internet through their smartphones. With such a tremendous growth in the online population, it is but natural to hear about ‘digital marketing’ every now and then. To understand how ‘Internet-based marketing’ took root, it is essential to understand its true definition. Digital marketing is a tool that uses various digital channels to market or endorse products and services to a particular target audience or potential customer group.

The Big Bang of Digital Marketing

Digital marketing began as early as the 1980s when computers became faster and better. The marketing world began to shift towards innovative methods of marketing such as relationship marketing that used large electronic databases of customer information. In 1986, a customer management firm named ACT! first came up with the idea of database marketing using software support that could make use of consumer contact details.

The Beginning of CRM

At the very beginning of the digital age, the Internet itself was an awe-inspiring platform. Though it allowed information search, it could do nothing more. In 1993, when the world was introduced to the first-ever clickable banner ad, no one ever thought that the Internet could be used for more than just getting information.

However, the restrains of the early 1990s started to break free after Jerry Yang’s Yahoo! got a whopping 1 million hits in the first year itself. This attracted the attention of many advertisers throughout the world, who until then was unsure of using the digital space. Many followed HotWired by purchasing clickable ad space on the Internet. By now, the digital databases of the 1980s had been transformed completely owing to pioneering efforts of the likes of Robert Shaw, Robert and Kate Kestnbaum, and others.

Marketers were talking about a revolutionary technique called customer relationship management (CRM) that allowed for actual customer interaction. Marketing was no longer bound to offline methods like pushing product.

However, marketers still felt they needed to make better sense of all the data they had to give their customers more efficient service. The first ever Software-as-a-Service (SaaS) company, Salesforce.com brought in a revolution to the marketing world with their ‘deliver business application from a website’ model, which later became popular as cloud computing.

The year 1998 saw the birth of the most popular Internet search engine: Google. The digital marketing space began to grow rapidly reaching its peak in 2006 when search engine traffic grew to a whopping 6.4 billion in just one month. With a keen aim to tap this enormous market, Google launched AdWords — the 3-line ad space and AdSense — a cost-per-click platform. With the advent of Web2.0, the Internet became interactive in the true sense allowing both businesses as well as individuals to actively participate.

By now, the Internet was a huge marketing space and the digital marketing business grew to USD2.9 billion in the US alone. This was the time when social networking grew in popularity with MySpace being the first to arrive.

Facebook came into existence along with many others. Social networking gave marketers a new business avenue with a huge audience to capitalize on. Soon, Facebook took a major chunk of the pie as other social media sites including MySpace failed to keep up.

Another important technology that appeared in the 1990s is Cookie. Cookie, a digital code that is left behind in the user’s browser when they visit a website, became a vital part of the digital evolution. Marketers saw cookie as an opportunity to source valuable user information from. In the next few years, YouTube was launched, which gave marketers a new route. The word ‘analytics’ grew in popularity as Google Analytics brought a wealth of information for marketers to play with.

The post-2000 decade saw an explosion of information as the Internet transcended from beyond PCs and laptops and crawled into mobile phones. Mobile technology was revolutionized with iPhone sales soaring. Thus began the era of online shopping with smartphones becoming capable of doing just about anything besides making phone calls. SMS, email, and social media marketing became common to talk with growing digital footprint of users. 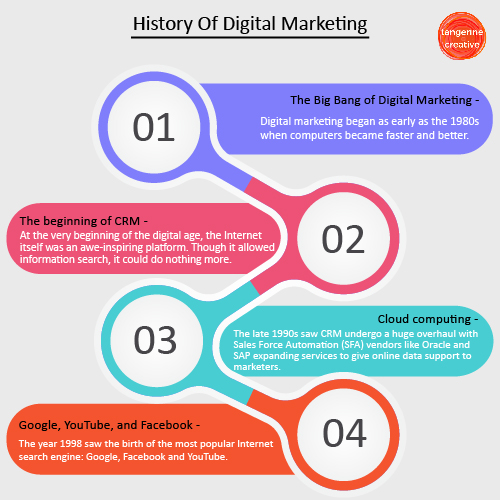 Digital marketing has come a long way – from the early days when marketers realized the importance of having a digital component to creating a complete digital space for it. With so many tools to make life easy, digital marketing only continues to evolve more over time.

2 thoughts on “History of Digital Marketing”